Sandy Cleland has set up a selection of prints which were accepted at this year’s London Salon in the downstairs gallery at Great King Street.

It will be on display until the end of October.  All members, old and new, are invited to visit this exhibition which contains many superb prints. We are very privileged to host this exhibition and are one of only four venues in Britain to do so.

EPS does its very best to bring you the best of today’s photography – we have had our own International Exhibition during the Festival, which we trust that all members managed to visit at least once.  The RPS Visual Art Group also had their annual exhibtion on display at the same time.  Later this year we will have our annual exhange exhibition with the Dublin Camera Club, as well as a number of exhibitions from groups of the Society.

So don’t say you weren’t told!

Members of EPS did very well in our own International Exhibition this year.

No less than ten members had a total of 19 acceptances (11 colur and 8 mono), which is almost 10 percent of the total.  I haven’t done any research, but I suspect that this might be a record, certainly in recent years.

I suspect that some awards might have been given too, were it not for the ruling that EPS members are eligible only for the Edinburgh Medal.  This year it was Neil Scott’s “turn” to win this medal.  Karen Berry and Neil have alternated in winning this over the last four years!

A very interesting statistic is that this year, only 15 prints were accepted from countries other than Scotland, England and Wales.  I am about to look at the statistics from the 2000 exhibition to the present day and will publish these as soon as I can.

Please go to the Phoenix Group page for details

April 1st is All Fool’s Day, but it is no joke that the 152nd Edinburgh International Exhibition of Photography opened for entries on that day.

The Edinburgh International is one of the world’s oldest photographic exhibitions, which accepts only prints.  Indeed after recent changes in other salons we are one of only a very few exhibitions which does so.

You can enter up to four colour and four mono prints to this prestgious exhibition, and full details are found elsewhere on this website, or by going to http://www.edinburghphotosalon.org/

Some of the award winners at the Members’ Night on 21 March.  Please click on images to zoom in.  (You can click a second time for an even greater zoom!!) 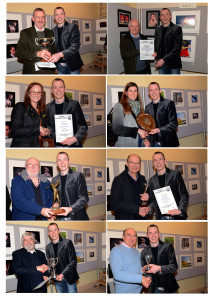 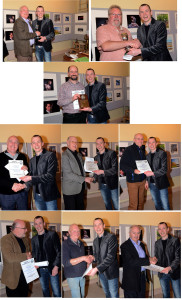 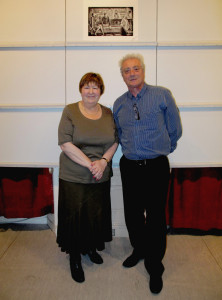 Although the Members’ Exhibition was open to the public for two days this year, the attendance was disappointingly low. Only 72 visitors came through the door, and more than a few of those were club members. 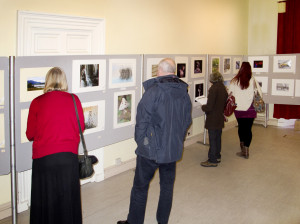 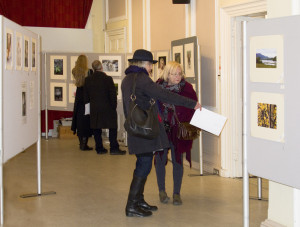 At five o’clock on Sunday 23 March, a good crowd of volunteers helped dismantle the exhibition, and all records were broken in the time taken.  Believe it or not, we took just around 25 minutes to take down all the prints, labels, numbers, and sort the prints into two piles – one for Rikki to talk to on Wednesday, the other for return to members.  The 21 boards were dismantled and stored away and most of the chairs returned to the room.

Here is the “front end” of the room during the exhibition 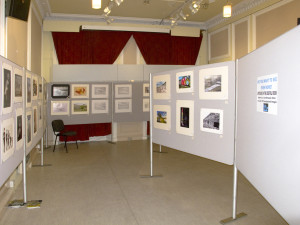 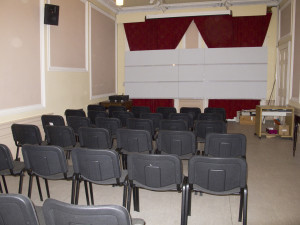 is the same view 25 minutes later!

While this is a worthwhile achievement, it means that the results of many, many hours and days of work preparing the exhibition, by so many people, can disappear in such a short space of time.  Also the disappointing turnout, in spite of more aggressive publicity this year, makes one  wonder if it is all worth it.

Thanks again to everyone who helped.

Rikki will be talking to 52 prints on Wednesday night, and these will be available for collection by the authors at the end of the meeting.  This will allow members to pick them up in time to send them to the Scottish Salon.  Scottish Salon entries will be collected by Richard Bingham and Sandy Cleland at the Phoenix Group Meeting on Thursday March 27.  The remaining prints are now available for collection from the Library.  They are in two Nomad boxes, so please be careful looking for your own!

Around 60 members braved a wet and windy night to attend the Members’ Night at the Annual Exhibition.

The Exhibition seemed to be well received, both the prints in the Main Hall, and the projected images shown on a continuous loop in the Digital Room.

Unfortunately Rikki O’Neill who judged the exhibition was unable to be with us to present the awards, and the presentations were made by Senior Vice-President Stephen Meek.  Unusually almost all award winners were present to receive their trophies and certificates. Even more unusually, the choice of prints on the Popular Vote went to two images selected by Rikki!

Full details have been posted on the notice board at Great King Street.

Many thanks to all who were involved in this year’s exhibition – firstly to Terry Railley who handles the whole of the PI section, from collecting and collating all the images, sending them to Rikki, and then creating two slide shows – one with titles and authors’ names only, which was shown before the results were announced, and another with the awards listed, for display after the awards are announced. He set up the continuous loop slide show in the Digital Room.  Terry has also set up the digital display in the Lobby for public viewing.   Richard Bingham and Sandy Cleland put in a lot of effort on the print side of things, from collection, collating, and cataloguing, preparing spreadsheets etc, as well as being part of the expert team who assemble the exhibition.   Richard (Hawkeye) also casts his eagle eye (sorry to mix my ornithological metaphors) over the catalogue entries.  The exhibition itself involves setting up the 21 display boards, and mounting the 133 prints.  The team was Richard, Sandy, John Wells, Davd Wolfenden, Jim Moir and Ian McNaught and we managed to get the whole exhibition up before lunch.  Thanks also to June Scott for providing the refreshments – hot cups of tea, coffee and Jaffa Cakes being very welcome on such a cold night.

Thanks to Chick Calder for welcoming guests, and handing out catalogues and explaining the complex system for the Popular Vote – which involved writing two numbers on a voting slip!  And to Alex Melrose, the Returning Officer, for counting the votes and being around doing all sorts of other, necessary jobs.  And finally, my thanks to the volunteers who man the door on the two days when the Exhibition is open to the public, Jim Moir, Isobel Lindsay, Doug and Sue Hamilton, George Neilson, Sue Goode, and the crew who do the last stint, then remain to help take down the exhibition at 5pm on Sunday – you have all been mentioned already!

Now – come along to EPS on Wednesday 26 March to hear Rikki O’Neill explain his choices and discuss many of the other images too.  He is an excellent speaker as well as judge, so it promises to be a very entertaining evening.

All the prints and PDIs are now with the judge – Rikki O’Neill – and the fate of the trophies is in his hands.

There was a surprising downturn in the entries this year, in both sections.  Prints are down from 191 to 136 and the PDIs from 198 to 156.  This is a considerable drop from last year, and bucks the trend, especially for prints, which has been rising for the last few years.   One or two regular contributors did not enter for various reasons this year, but even that does not account for the drop.  Rikki will be happy, however, as I had warned him that there would likely be around 400 images altogether, instead of the 292 which were entered.

Members’ Night, when the trophies will be announced and presented is Friday 21 March, so put that in your diary.  But the exhibition has to be set up first, and we have only two days to do this.  Ray Spence will have given his talk on Wednesday 19 March, and we ask members to take their chairs upstairs at the end of the night.  Then a team will set up the exhibition on the Thursday and Friday.  Although we have one or two diehards helping with this – please come along and give a hand.  The exhibition doesn’t set itself up!

Rikki is unable to be with us on Members’ Night night, but will come to EPS on Wednesday 26 to talk about his choices.  Also, for the first time, the exhibition will be open to the public for two days instead of one as previously.  On Saturday and Sunday, 22 and 23 March the Exhibition will be open from 11am until 5pm .  We need volunteers to man the door and take the gate money (£1).  We need members for three sessions on each day – 11am – 1pm, 1pm – 3pm and 3pm – 5pm.  So please get in touch and offer your services.

We also desperately need help at 5pm to dismantle the exhibition – taking down all the prints, dismantling the display boards, and clearing the Digital Room of chairs, and the projector set-up.  We also need to put chairs back in the Main Hall for the CD group’s meeting on Monday 24.  In previous years a small but dedicated and expert team has done this (apart from replacing the chairs – perhaps the CD Group could collect them on the Monday night – pleeease!) – our record stands at 55 minutes!  But we are always on the lookout for more volunteers to help out.  Again, get in touch.

And finally – if you won a trophy last year, we would like it back, well before the Members’ Night.  And please have it nicely polished before you return it.  Polishing 18 trophies just before handing them over is a task we shouldn’t have to do.

Four members of EPS – Doug Berndt, Richard Bingham, Sandy Cleland and Neil Scott – went through to  Glasgow on Thursday 23 January to support the Society in its annual competition against Queen’s Park Camera Club.  The format is that each club puts up 15 prints and 15 projected images. The judge for the evening was Andrew Cameron from Livingston CC.

This win was satisfying for EPS as a decision had been taken to allow our members only one image each – one print OR one PI.  So we were represented by no fewer than 30 members and it is further testimony that we have strength in depth.

A list of the individual scores will be posted on the noticeboard at Great King Street in due course.

Please note that Neil has updated the information on the Phoenix Group pages regarding the selection of prints for the forthcoming Print Championships.

Edinburgh Photographic Society is in Scotland.

We continue to share some of images from our first competition of 2021. This particular image was taken by Keith Walkingshaw @embra.photo and is entitled

We continue to share some of images from our first competition of 2021. This particular image was taken by Sandy Cleland and is entitled “The

We continue to share some of images from our first competition of 2021. This particular image was taken by Barbara Bartkowiak and is entitled “Narcissus

Edinburgh Photographic Society is in Scotland.

The first competition of 2021 was judged recently and we saw a great number of excellent images being presented by EPS photographers. This particular image