Here are the final panels submitted by the groups.  It’s amazing to see the diversity of styles that emerge from this challenge. Well done to all who participated. 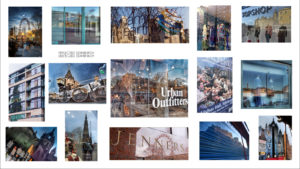 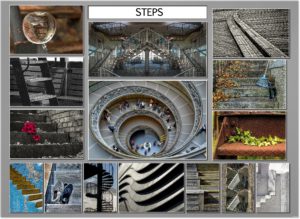 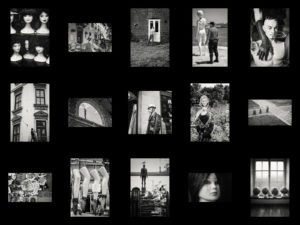 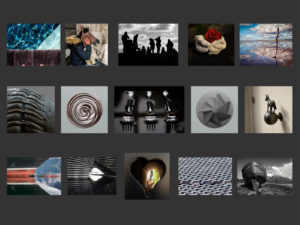 The aim of the Photo Safari is to work in mixed-ability groups of around six to eight people and for each group to work, as they see fit to produce a portfolio of 15 themed digital images. Each group has a unique theme. The mixed-ability groupings will help new members and those new to photography. Groups will be established at the first or second CD Group meeting of the season. The groups will be led by an experienced society member. Portfolios must contain an image from each group member (or 2 images if group numbers allow). Images are presented by the group leaders at a show-and-tell and a guest adjudicator selects his or her winning team on the night.

The challenge this year is to create a panel of 15 images that reflect Elliott Erwitt’s quote:-

“To me, photography is an art of observation. It’s about finding something interesting in an ordinary place… I’ve found it has little to do with the things you see and everything to do with the way you see them.”

1  You may want to select a subject – a chair, feet, whatever.
2  Your group is to create a set of images that portray that subject in an unusual / unique manner.
3  Your digital images can be mono or colour or a combination of both.
4  You should aim to have at least two images from each member of your group.
5  Someone from your group will present your panel on Monday 3rd December.  Adjudication will be by Doug Berndt and will be based on the presentation as seen on the night.
Monday 12th November has been set aside for you to progress your panel.  The members of each group will be sent out via e-mail.

Five teams completed the Photo Safari this year.
It was proposed at our AGM on 17 April that we have just one theme for the coming season and that we may see a different interpretation of that theme from each of the safari groups. The theme may be a song title, a poem, a painting. After a bit of research Alistair Cowan proposed that we adopt the first stanza of “Preludes” by T S Eliot and the work that ensued was very creative and all involved found it very challenging – and some even enjoyed it!

The winter evening settles down
With smell of steaks in passageways.
Six o’clock. The burnt-out ends of smoky days.
And now a gusty shower wraps
The grimy scraps Of withered leaves about your feet
And newspapers from vacant lots;
The showers beat
On broken blinds and chimney-pots,
And at the corner of the street
A lonely cab-horse steams and stamps.
And then the lighting of the lamps.

Tom Gardner kindly acted as our impartial adjudicator for our “Show and Tell” evening. Group 1 (with only two surviving members – Graeme Gainey and Adrian Cullen) was judged to have most closely expressed the emotion in the poem. It wasn’t an easy choice and we can only thank Tom for his considered thoughts on the panels and his selection. A wonderful evening and our thanks to everyone who took part for their enthusiasm and images that they provided. 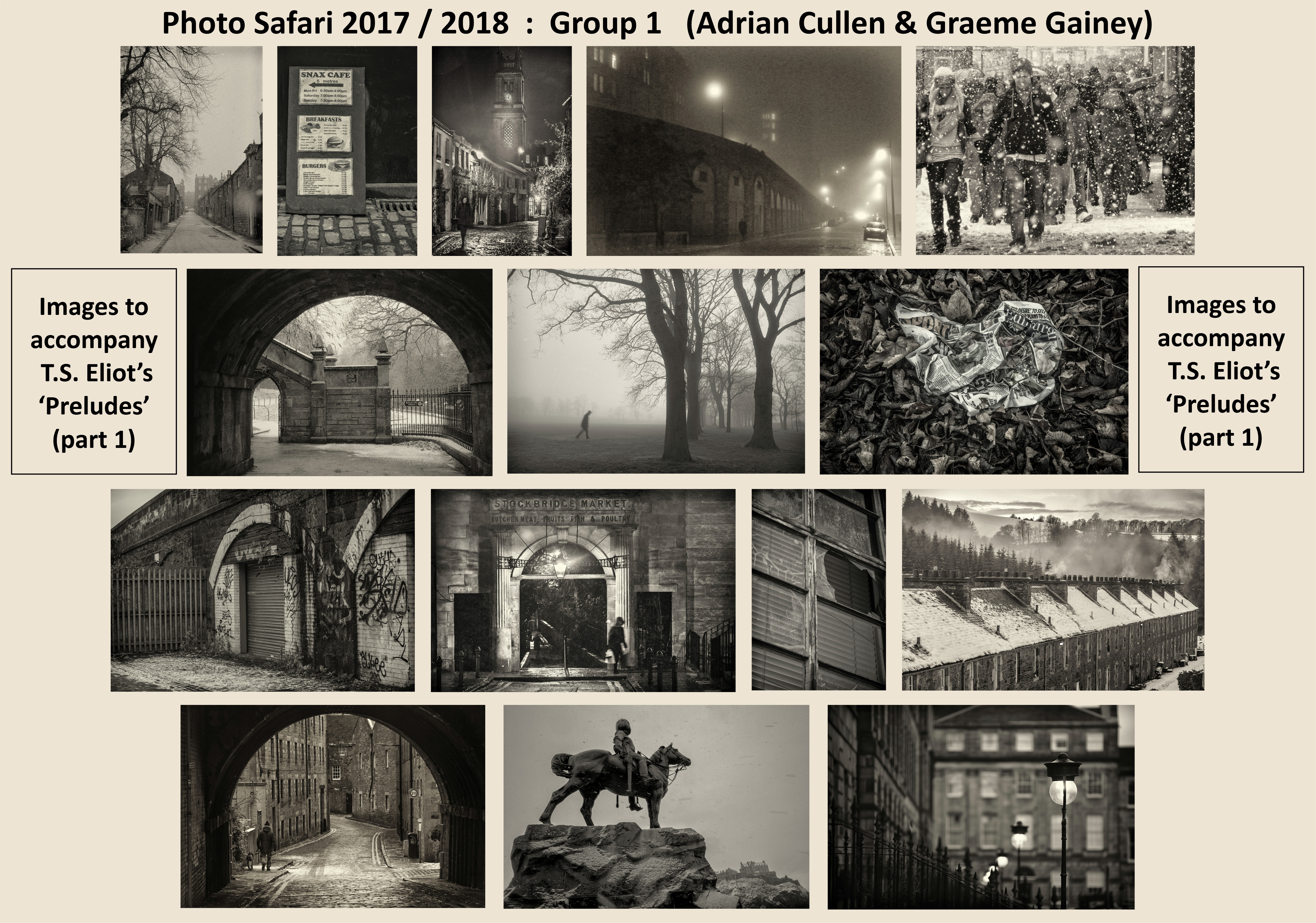 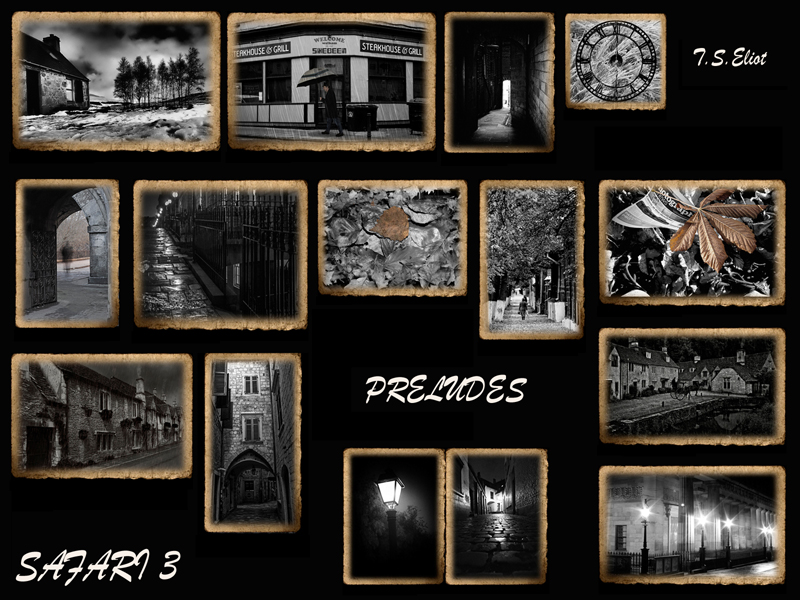 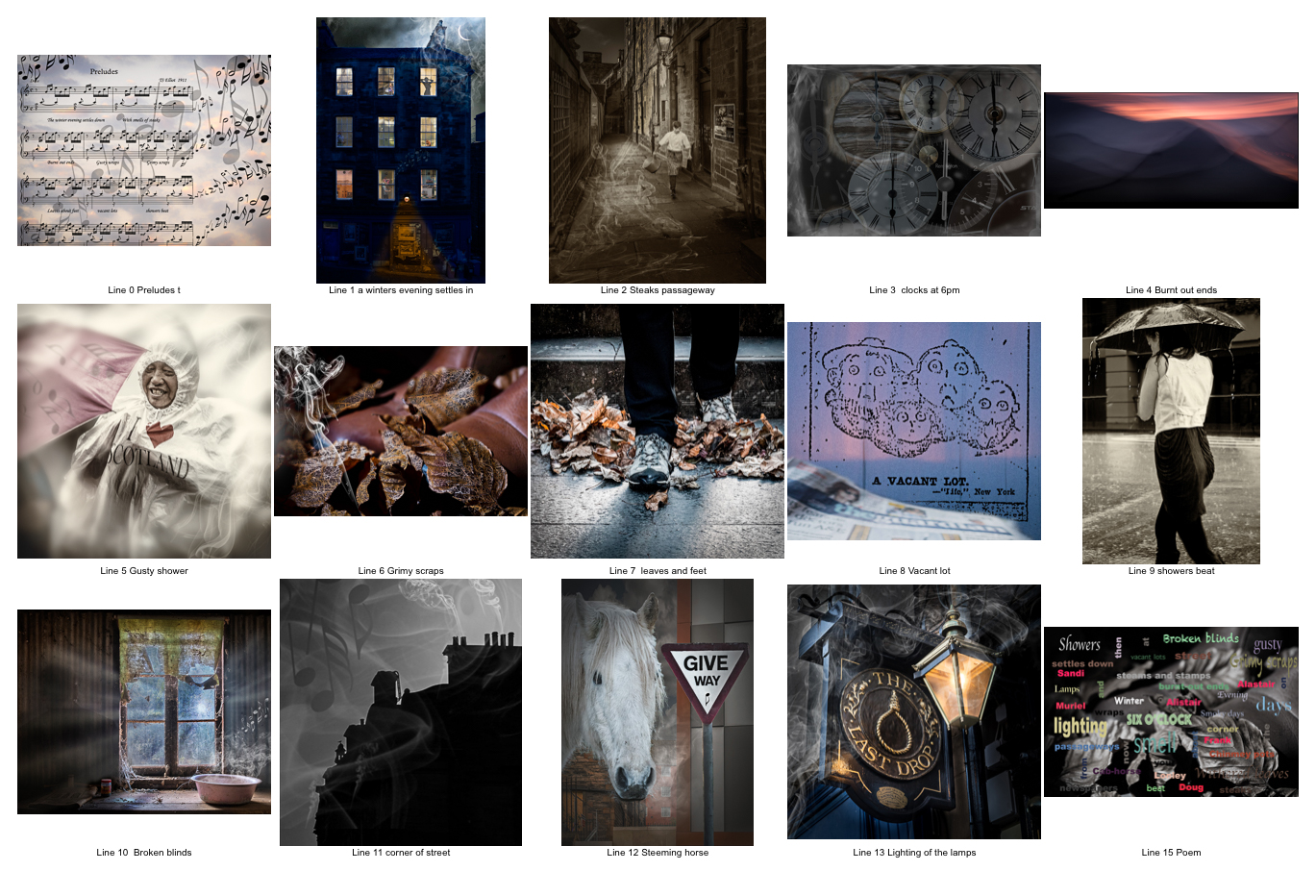 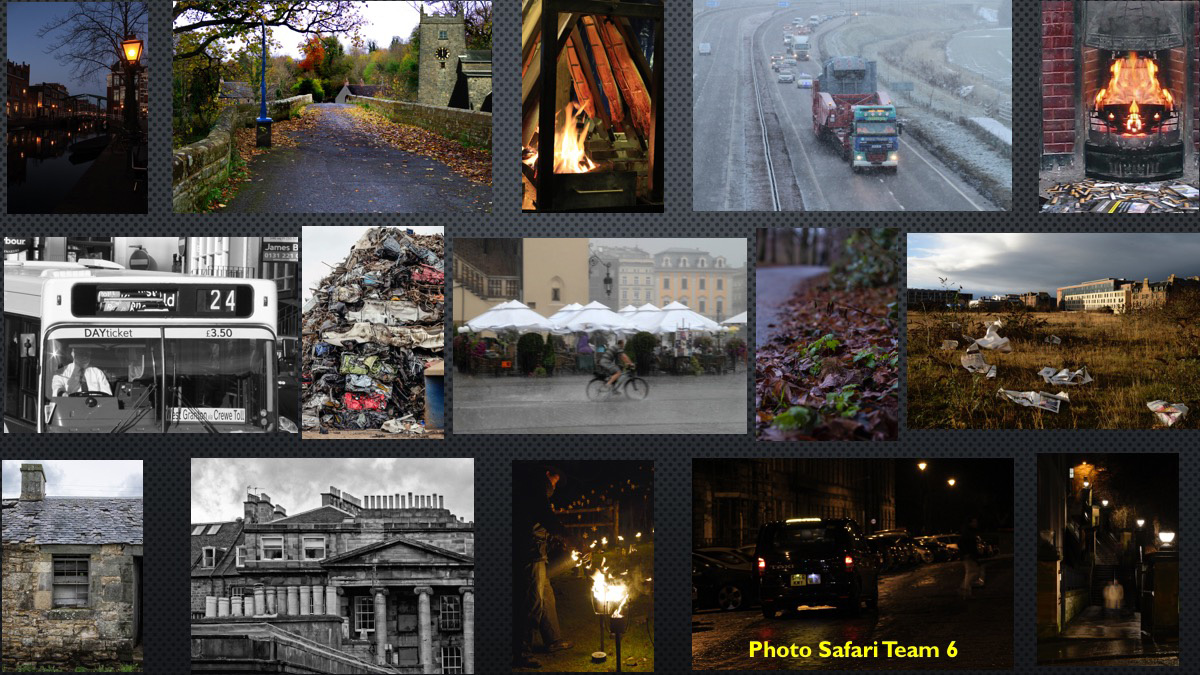 This year’s Photo Safari had 6 teams who provided panels of 15 images on one of the following themes:- Broken, Shadows, Smooth, Speed, Vivid and Lost. Our thanks to everyone who took part for their enthusiasm and images that they provided. As always the topics caused much discussion and each team’s approach was different.

George Neilson kindly acted as our impartial adjudicator for our “Show and Tell” evening on 30th January when each team presented their group’s images.
The ‘Broken’ Group used the panel to look at the environment and used a repeating background across the images to bring them together visually. This was chosen as the best panel on the evening by George.

The final 6 panels are shown below:
Broken Group’s winning Panel – 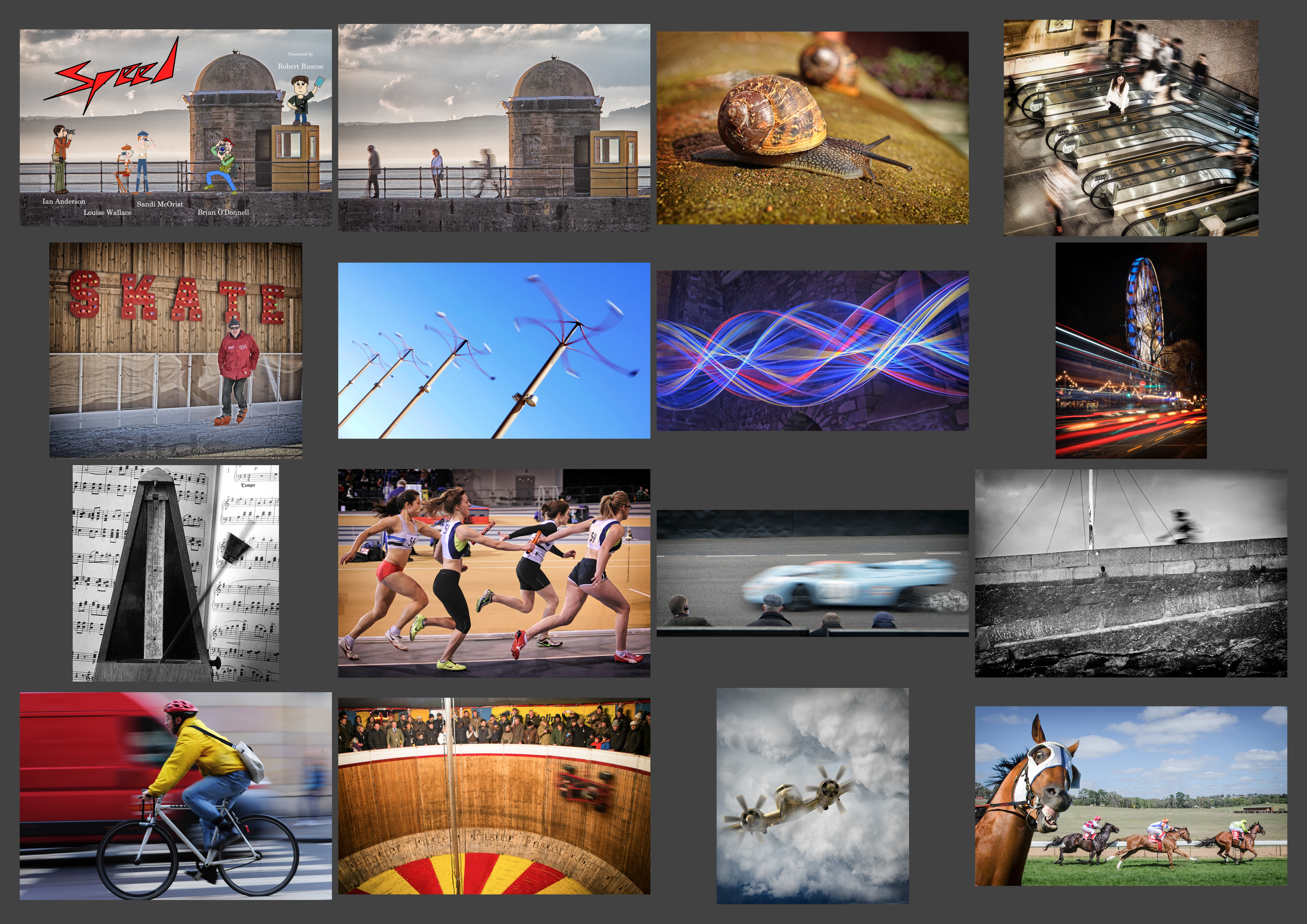 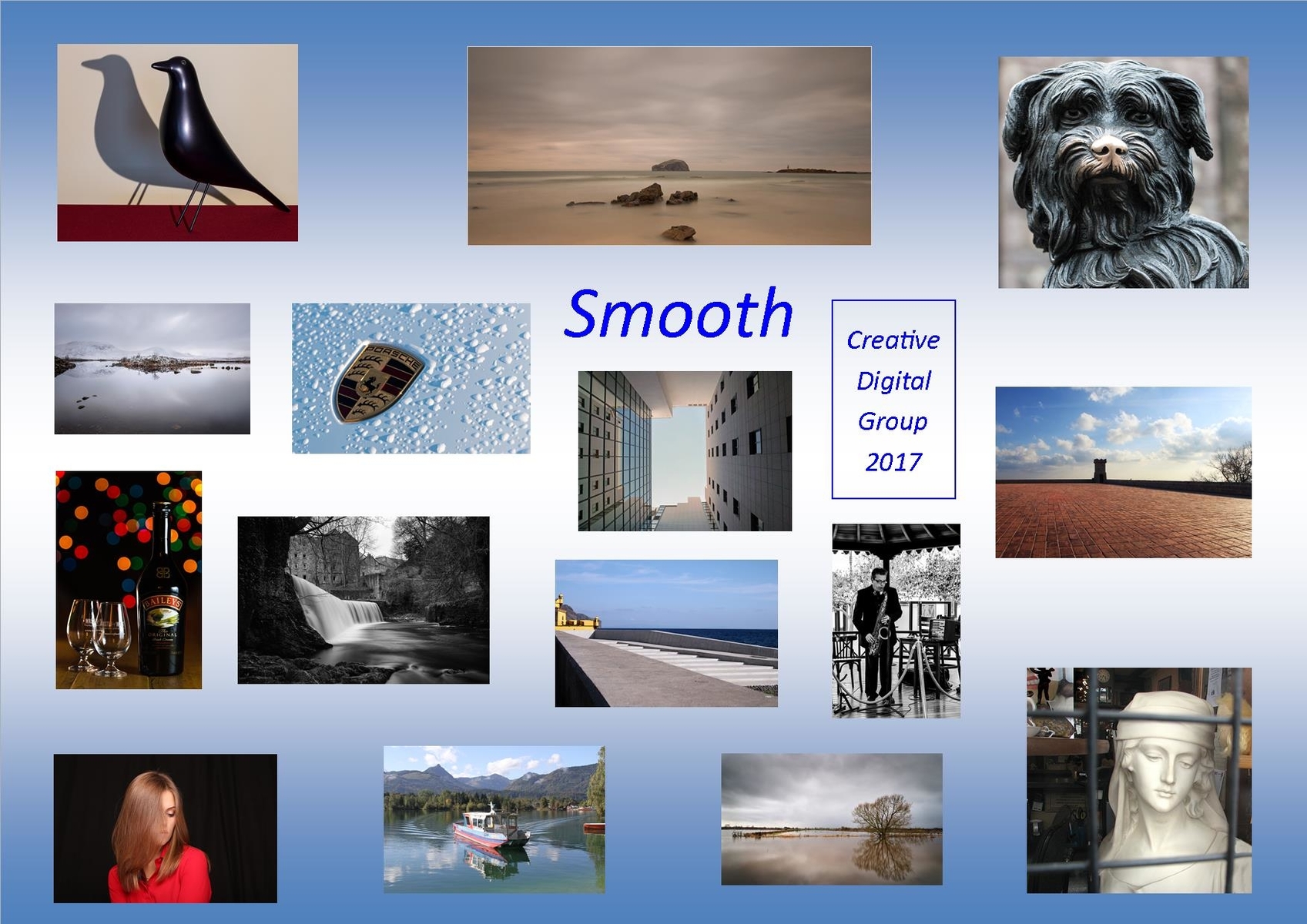 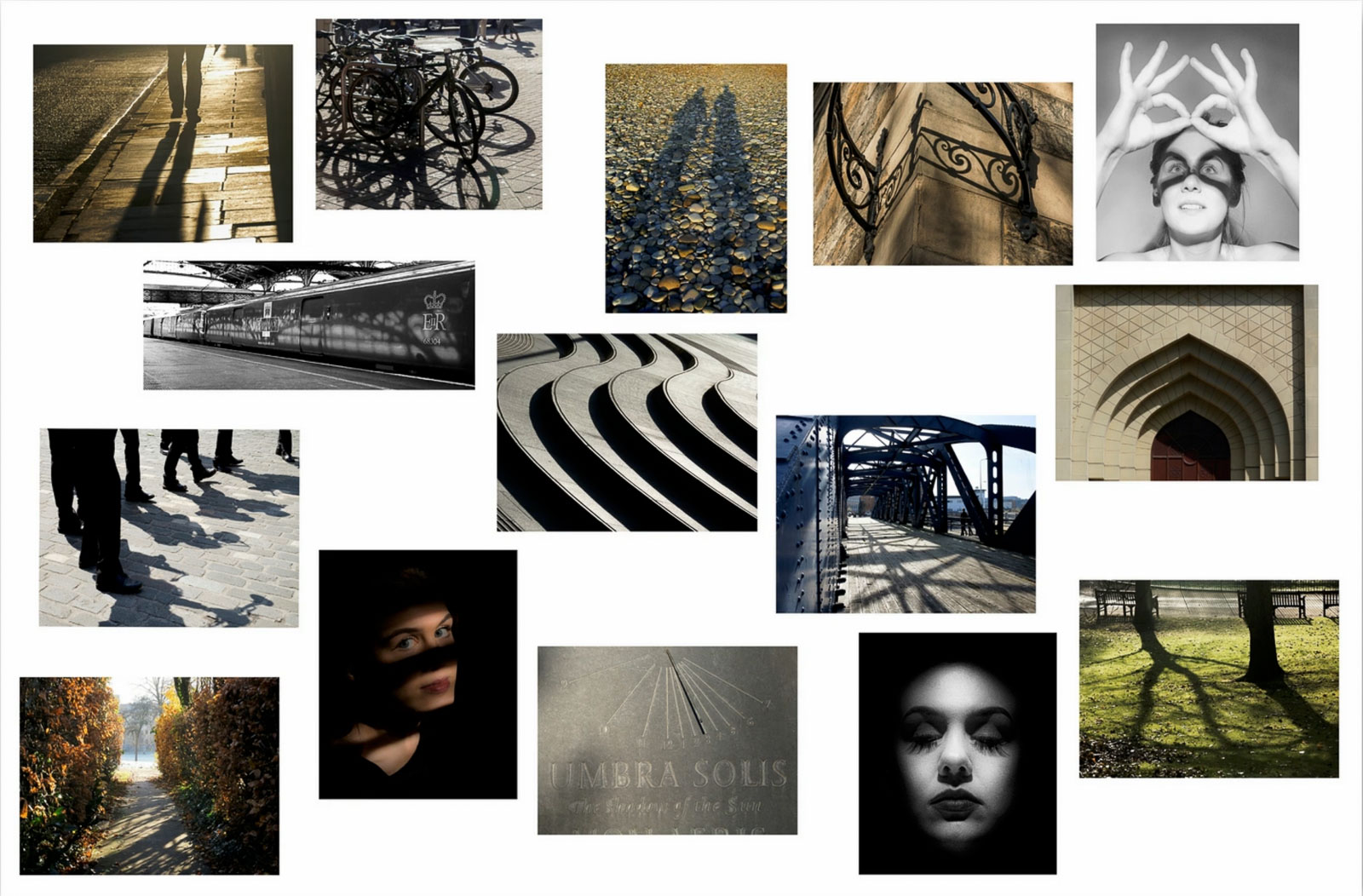 In a change from previous years, each group had only one theme. This allowed for some creativity within the theme. The themes were: Metal, Plastic, Glass, Wood, Fabric, Stone. Each theme was drawn randomly by group leaders at the start of the season.
(The second of the on-line competitions was also based around these themes. Images were submitted for this on any Safari theme regardless of the member’s own Safari group.)
Congratulations to the Wood Group, led by Cheryl Beer, whose set of images was chosen as the best set by Mike Caithness ARPS our adjudicator for the show-and-tell evening on the 25th January. 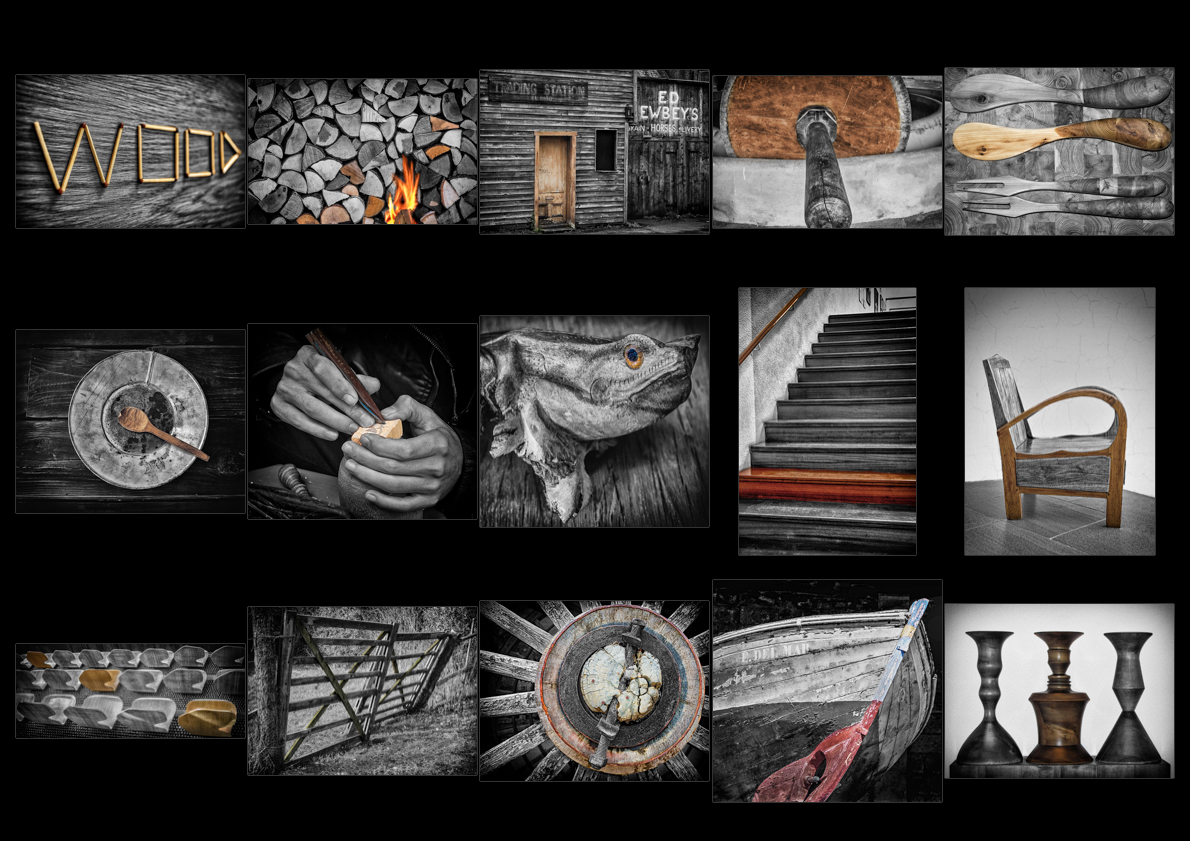 There was also a popular vote taken and this was won by the Glass Group, led by John Kelly. 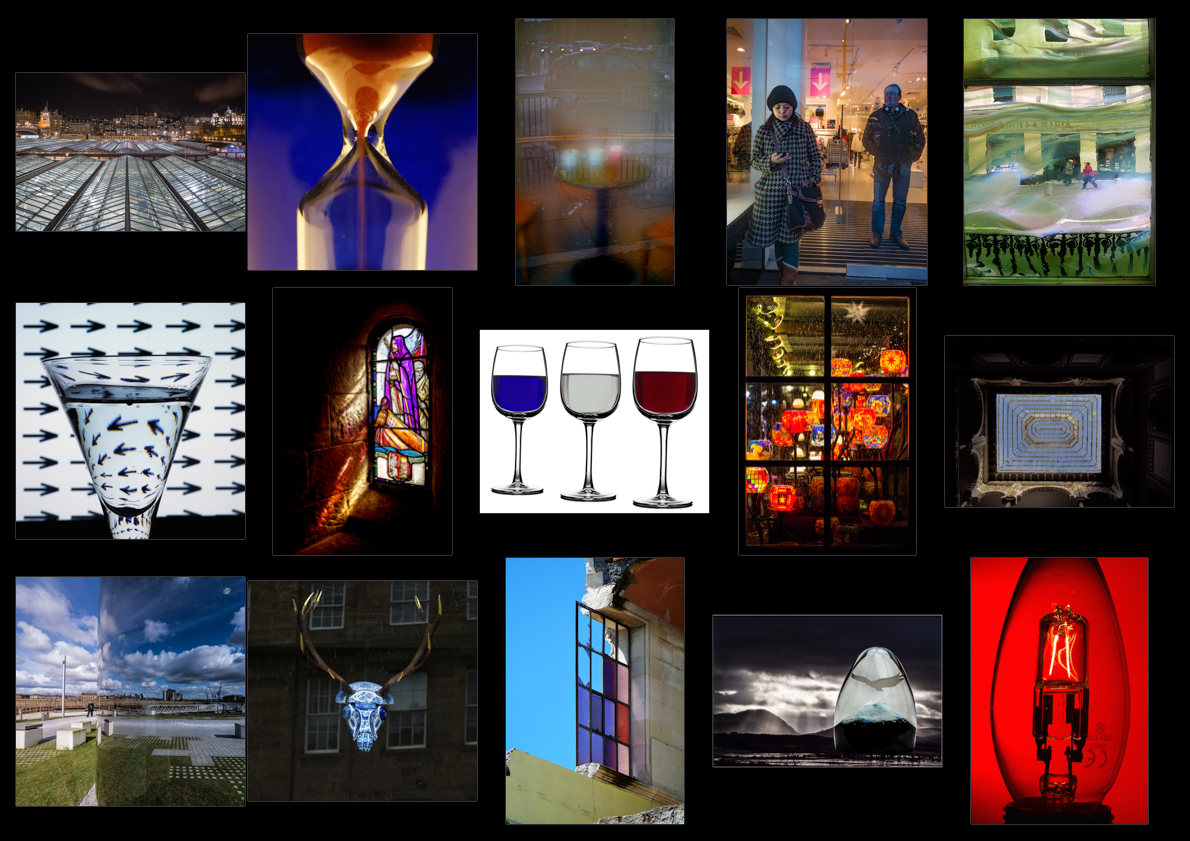 The Final Metal, Plastic, Fabric and Stone Group Images are shown below: 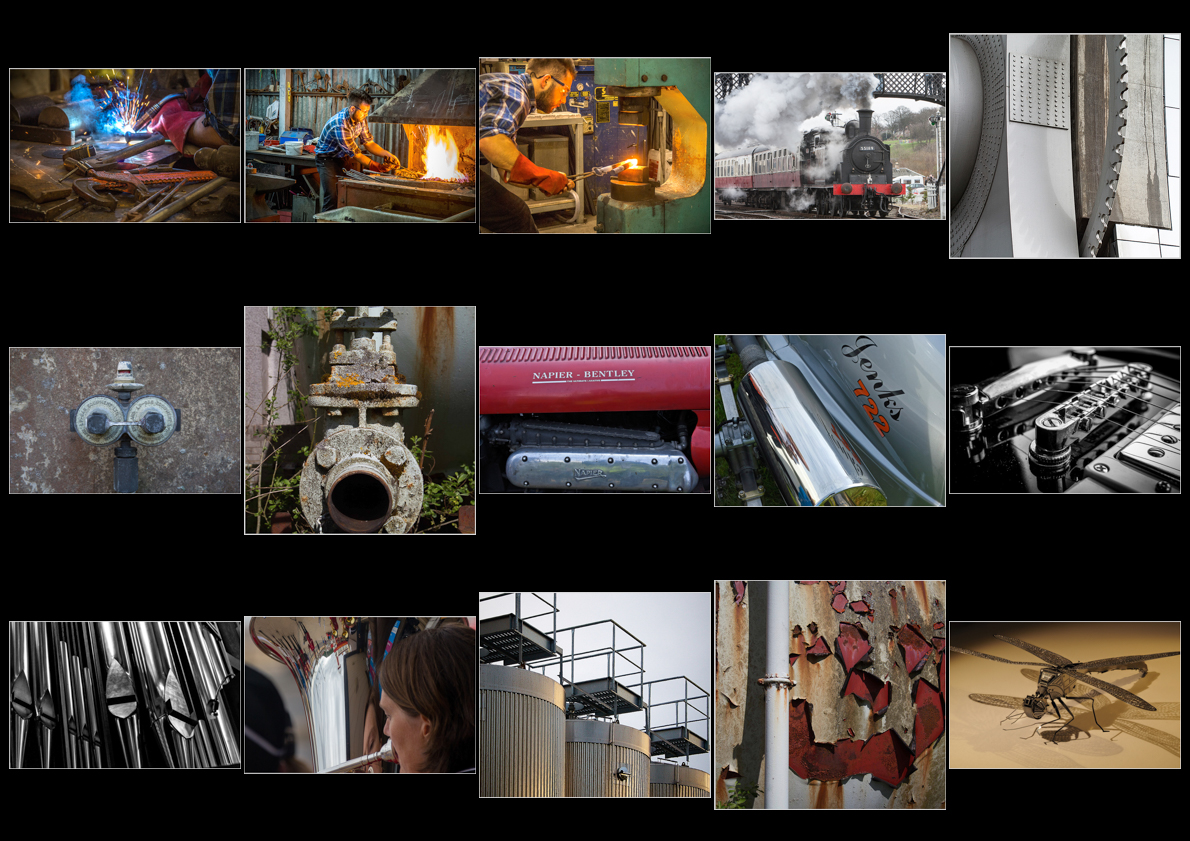 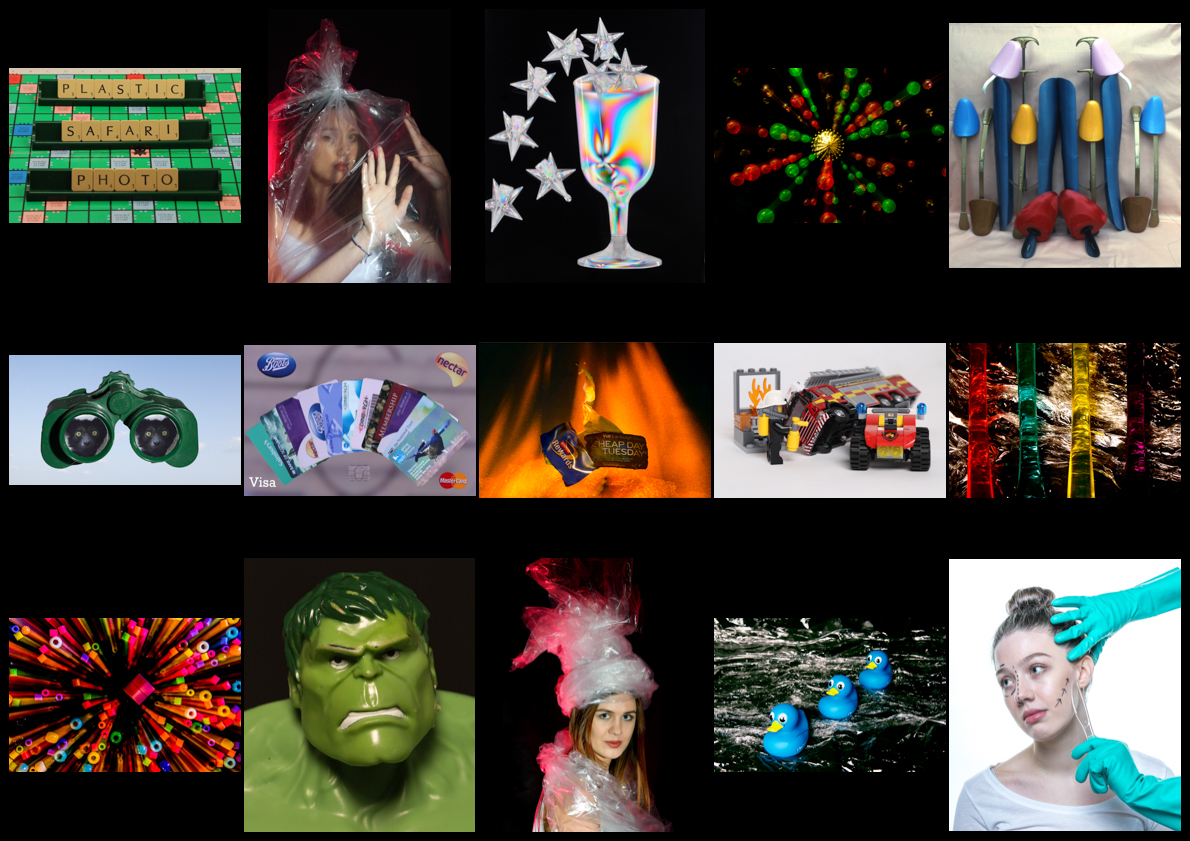 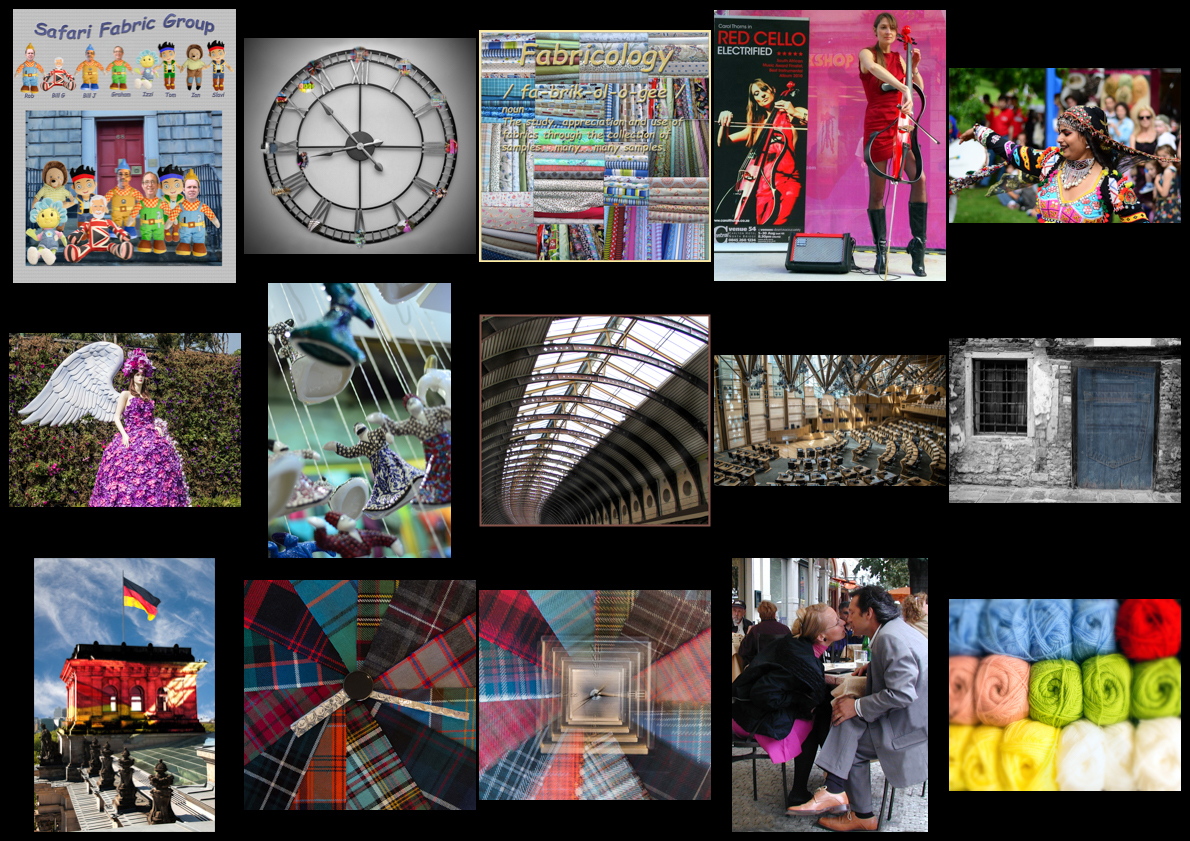 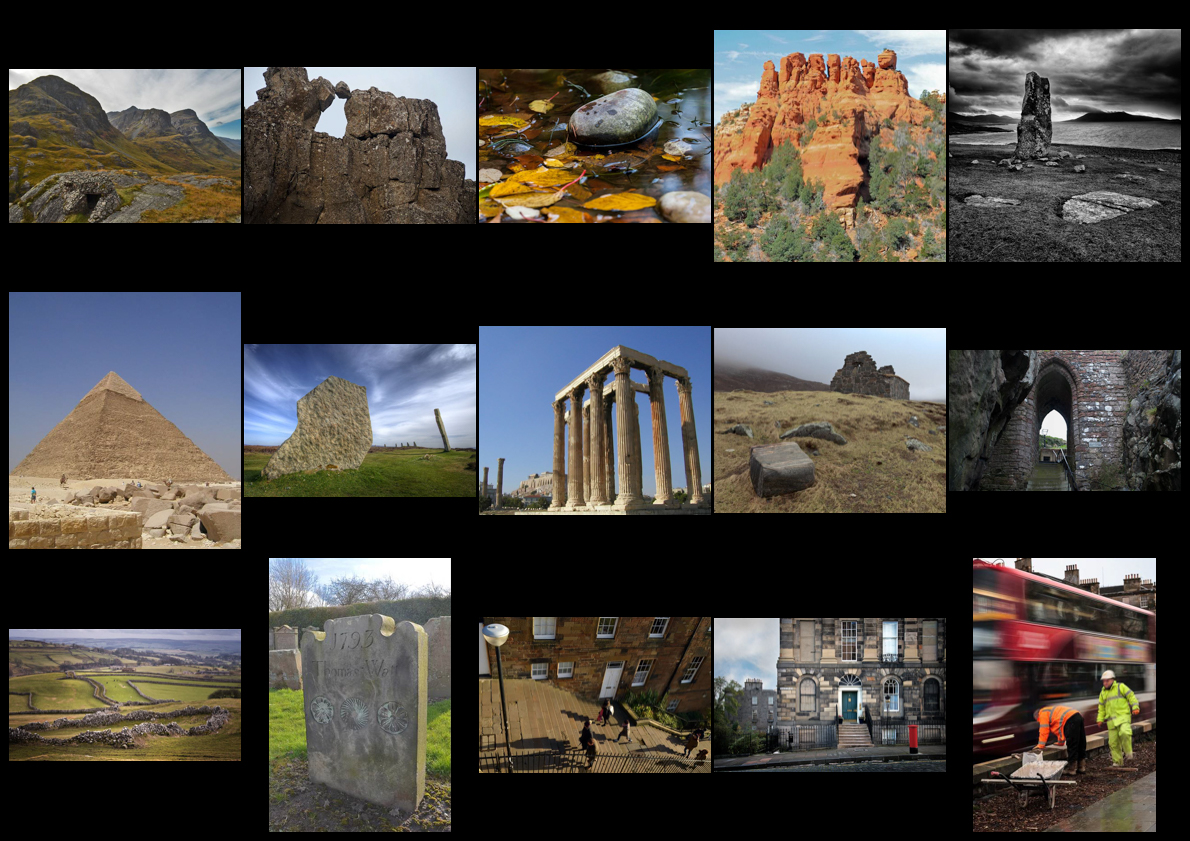 Congratulations to the Hexagon Team for winning our second Photo Safari. The Hexagon Team’s 15 images were chosen as the best set by Steve McGonnell at our show and tell presentation of our images at the CD Group meeting on 27 January 2014. Many thanks to Steve for his time and constructive comments.

Many thanks to all participants for some super images and to the team leaders who helped make this activity a great success.

The Hexagon Team’s winning images are below.

Congratulations to the Orange Group for winning our first Photo Safari. The Orange Group images were chosen as the best set by Sandy Cleland at our show and tell presentation of our images at the CD Group meeting on 20 January 2014. Many thanks to Sandy for his time and constructive comments.

Many thanks to all participants for some super images and to the group leaders who helped make this activity a great success.

The Orange Group’s winning images are below.

Library: The "Book of the Month" for December is The New Black Vanguard by Antwuan Sargent. With over 300 pages of profiles, images and interviews…

Library: We now have copies of The British Journal of Photography in the library. So, if you want to see some really cutting edge photography,…

Library: The Book of the Month for November is the Scottish Nature Photography Awards Portfolio Yearbook 2018. This is a collection of winning images from…