EPS enjoyed success at the recent Scottish Salon, winning the award for best Scottish Club with a total of 1038 points. Dumfries came second with 802 points and Bon Accord third with 700.
Overall, 21 members entered and achieved 72 acceptances with 4 HM certificates and 1 SPF Gold Medal. This was an excellent result for the Society and thanks are due to all who entered via the Club entry system.
Full results and details of the Exhibition can be found at the Scottish Salon website:
http://www.scottish-photographic-salon.org/results
Scottish Salon Individual Results 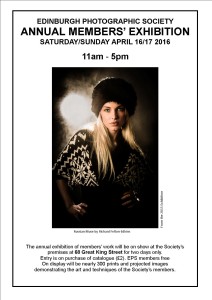 The Members’ Night of the exhibition on Friday 15 April brought around 50 members and guests to the Society.  The trophies were presented to winners by Stephen Meek, President.  On Saturday/Sunday 16/17 April the exhibition was open to the public but we had a mere 50 or so visitors.  One of these was Doug Corrance who gave a talk to the Society on 20 January.  He spent some time talking to those of us on the door, and took this photo – Neil Scott and Chick Calder at the table with Richard Bingham on the steps, all supervised by David Octavius Hill 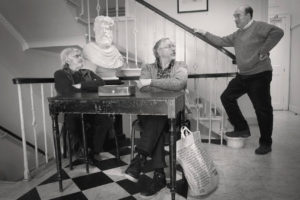 In retaliation, Neil took this image of Doug! 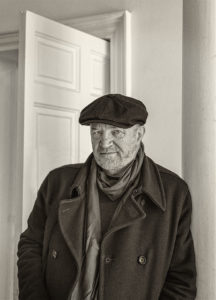